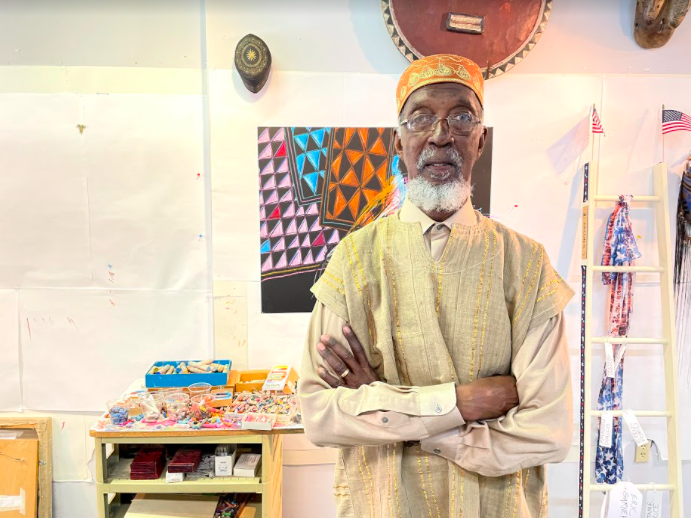 As the team lowers the scissor lift and begins packing up supplies, a few students stop and look at the five new pieces of professional artwork hanging in their hallway. The installation at Belmont continues the district’s initiative to display a contemporary, local African American art collection in each school.

As the students stop to admire the work, it is clear that the display is already having its intended effect — students notice that the paintings are of people who look like them, who are from their community, and who went on to achieve great things.

When installations are completed at all buildings, the Dayton Public School District will be the first district in the nation to have a contemporary African American art collection as part of each school’s learning environment.

Belmont is the third school to have pieces from the Dayton Skyscrapers Art Project installed. The initiative began in 2010 with the opening of Dayton Boys Preparatory Academy. At that time, Dayton Boys Prep, now called Roosevelt Elementary, was the first public school in the nation with a contemporary African American art collection.

The Dayton Skyscrapers Project, led by local and internationally-renowned artist Willis “Bing” Davis, began in 2006 and continues today. Local artists create pieces honoring Dayton-area “Skyscrapers” — people who stand tall because of their outstanding achievements and contributions to the Dayton area — of past and present. Edwin C. Moses, an Olympic gold-medalist; Charity Earley, the first African American woman to be an officer in the Women’s Army Auxiliary Corps; and James H. McGee, the first African American mayor of Dayton, are all examples of Skyscrapers.

Shortly after Dayton Boys Preparatory Academy opened, the initiative stalled. However, when Dr. Elizabeth Lolli became Superintendent in 2018, there was a renewed push to put the arts back into schools. Along with reviving music and band, Dr. Lolli requested that the district continue installing Dayton Skyscrapers artwork in each school. In 2021, installations began again.

“The Arts are so important because it is part of our culture,” said Dr. Lolli. “Who better to teach our students about culture and about art in general than our own local artists?”

Dr. Lolli said the artwork on display also gives students a better understanding of their community, its history, and the people who came before them. It serves to inspire them to make their community a better place and achieve great things on their own.

“One thing I’ve noticed about young people is they appreciate more art than we realize,” he said. “When they see images of themselves — people on the wall who look like them — I want them to feel confident, pleased and also have what we call ‘positive envy,’ meaning that they will think ‘I’d like to be on a wall someday. I hope I’ll do something that makes someone think about having my image displayed someday.’”

Davis said one of the initial objectives of the Dayton Skyscrapers Project was to show young people a wider range of role models and possible career paths, as Dayton natives have achieved highly in a multitude of professions, including business, law, politics, entertainment, and more.

In addition, the artwork provides students with positive images of people who looked like them, lived where they do, faced many of the same obstacles they do and still went on to achieve great things and give back to their community.

The artwork is not only seen in passing, either. Teachers incorporate it into the curriculum to help educate students about historical events and figures, and even about different art mediums and techniques. For that reason, Davis is very conscious about which pieces are selected for each school. He strives to pick multiple artists, multiple mediums, and a variety of Skyscrapers to provide students with a well-rounded experience.

By the end of the school year, five buildings are expected to have art installed. Within the next two years, all 26 buildings should be completed.

This time, the project will not be stalled, and the district is going to great lengths to protect and preserve each piece.

“It is really important to understand that this artwork is permanent,” said Dr. Lolli. “It will not go away, it will not be taken down and put into a closet someplace. This will be here for our students from now on. It will be protected so our families and students can enjoy it.”

Davis said there is hope that other school districts will follow DPS’s lead and incorporate local art into their schools. At conferences around the country, cities and school districts have expressed interest in replicating the project, Davis said.

“I’m really excited about the potential of this project,” Davis said. “We don’t want to sit on it and say it’s just ours. It will be enriching to other communities as well.”

Any cookies that may not be particularly necessary for the website to function and is used specifically to collect user personal data via analytics, ads, other embedded contents are termed as non-necessary cookies. It is mandatory to procure user consent prior to running these cookies on your website.